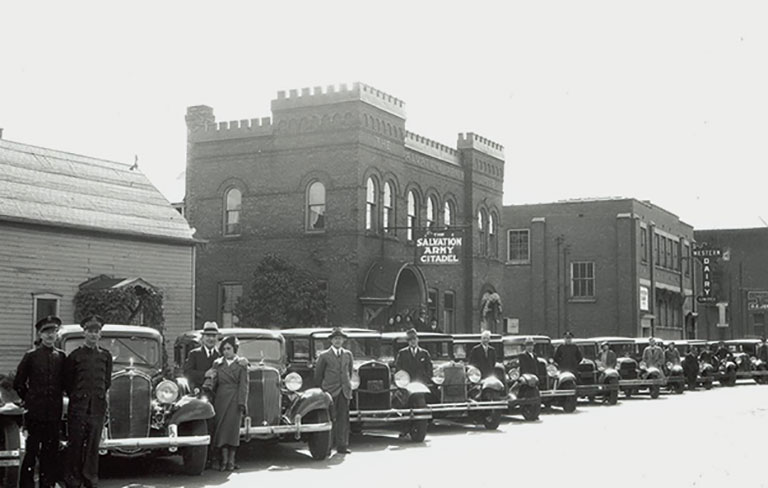 The Salvation Army began its work in Canada in 1882, just fifteen years after Confederation, and quickly began giving hope to those in need in this country.

The first open-air ‘meetings’, or worship services, were held in 1882 in London, Canada. Official Salvation Army operations began in July of that year with 11 ‘corps’ or church congregations in Ontario, and a year later Canada was declared an independent ‘territory’, responsible for its own governance within the worldwide organization.

The Salvation Army was established in St. Thomas in 1883 and we have been serving the community ever since.

SERVING OVER 1.85 MILLION PEOPLE EACH YEAR

The Salvation Army is now the largest non-governmental direct provider of social services in the country, serving over 1.85 million people each year, in 400 communities across Canada. The Salvation Army offers practical assistance for children and families, often tending to the basic necessities of life, provides shelter for homeless people and rehabilitation for people who have lost control of their lives to an addiction.

The Salvation Army’s Christmas Kettle Campaign has raised funds for more than 120 years to meet its demand for services. The Campaign has grown into one of Canada’s most significant and recognizable annual charitable events.

To accommodate the changing times, The Salvation Army in Canada continues to evolve. While the same values and goals still exist, new, innovative and effective programs such as community kitchens, skills-training and addictions day-treatment programs are addressing rising community needs.

Today, in Canada, The Salvation Army has 750 active officers (clergy), more than 16,000 soldiers (church members) and close to 33,000 adherents – those who call the Army their church home, but who are not formal members. There are 309 corps (churches) and more than 130 social service institutions of various kinds. As well, there are many thousands of volunteers and more than 8,500 people employed by The Salvation Army in the Canada and Bermuda Territory.