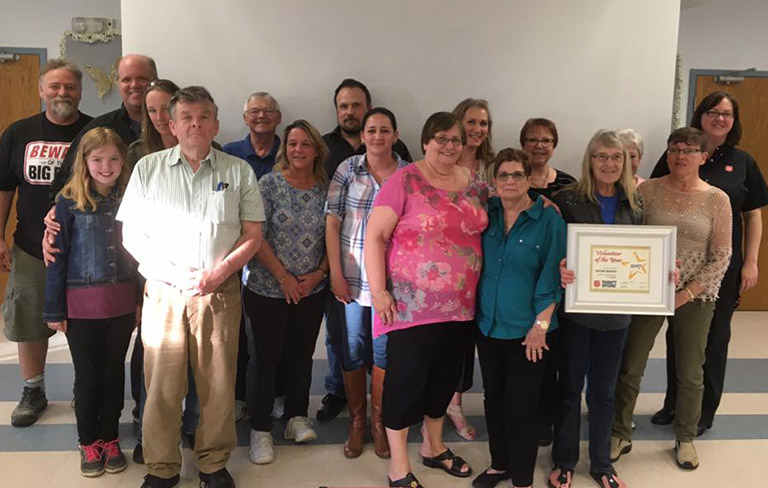 The role of our Thrift Store is both to generate funds to help The Salvation Army achieve its mission, and to influence positively the community in which we serve. We welcome donations of gently used goods. Items featured in our store includes housewares, electronics, linens, books, toys, and clothing for men, women and children.

Purchases made at the store help fund The Salvation Army’s mission in our local community while diverting thousands of items out of the landfill each month. A great eco-friendly alternative!

IT ALL STARTED OVER 100 YEARS AGO

By operating successful Thrift Stores and integrating with the mission and work of The Salvation Army as a whole, we exist to be a functioning and thriving modern day model of William Booth's conceived "Household Salvage Brigade" through which the marginalized and excluded of society will be refreshed and regenerated by way of meeting their practical needs. Salvation Army founder, General William Booth was a visionary who effected great change on an international scale. As founder of the Salvation Army, General Booth responded to social concerns in the 19th century by creating an organization designed to meet the needs of all humans without discrimination.

In response to the need for jobs and affordable merchandise, coupled with the fear of disease and a desire to preserve the land, Booth created the “Household Salvage Brigade” composed of a group of men and women, responsible for collecting unwanted household items.

More than 100 years ago, General Booth recognized and responded to social and environmental challenges that we continue to face today, further illuminating not only Booth's insight and social conscience but his compassion. Booth's legacy lives on through the work of The Salvation Army and the recycling retail brilliance of the Salvation Army Thrift Stores.

Today, with your help, we continue to raise the bar with a relentless and unwavering commitment to the cause.

SOME QUESTIONS YOU MAY HAVE

What are the programs and services supported by The Salvation Army Thrift Store?

The Salvation Army Thrift Store supports many programs and services both through our retail store and with the profits earned. In St. Thomas, we provide affordable clothing and household items to everyone. We also partner with our Community & Family Services office to offer vouchers for clothing and household items to families in need. We also partner with various community organizations to assist. For example:

How much of the funds generated are directed to charity?

Once operating costs are covered, 100 per cent of all proceeds go towards supporting the charity. The Salvation Army's most recent audited financial statement indicates that 86% of all monies received by The Salvation Army go directly to the charitable work - only 4% goes to fundraising and 9% to administration.

How can I donate clothing, toys and other household items?

How do you recycle clothing items that are not sold?

Salvation Army Thrift Stores often receives donated clothing that cannot be sold in stores because it is torn, stained and/or overly worn. The Salvation Army is still able to generate funds from these clothing donations and divert them from local landfills by selling them to cloth graders. The cloth graders re-sort the materials; turning some into rags, selling other parts for the fibre content used to make things such as upholstery stuffing and carpet padding, or resells the items in foreign markets. This results in a win-win situation for the environment and for The Salvation Army as these clothing items stay out of our landfills and generate funds to help our organization provide community programs and services such local food banks, shelters, daycare programs and children's camps.

How do you help to divert waste from the landfill?

The Salvation Army makes every effort to be as environmentally conscious as possible. The recycling of unsellable goods, or parts of goods like scrap metal stripped off an appliance, is a large part of our intake and review process for donations. Unsellable books and shoes are sold by the pound, corrugated cardboard is baled and sold reground and reused, and damaged clothing is baled and sold by the pound as textiles. We also sell plastic, metal and soft toys to recyclers. Salvation Army Thrift Stores also act as collection sites where consumers and businesses can drop off broken or unwanted electronics. We ensure that all of these unsellable items are recycled ethically and that none of them end up in our landfills.

How do Thrift Stores determine the value or price of items?

All Salvation Army Thrift Stores take the same factors into account when pricing items for sale. These include quality and condition, seasonality, style, brand name, uniqueness and rarity. Items that are in superior quality and condition will be priced at a higher price point than those that are in fair to good condition. The brand recognition or fashionable appeal of an item also helps us to determine the price point.

Does the Salvation Army Thrift Store only sell used items?

Salvation Army Thrift Stores sell gently-used clothing and other household items donated by the public. However, Salvation Army Thrift Stores also receive donations of brand new product including clothing, toys, furniture and other items from businesses. In addition, we also offer a line of brand new affordable and high quality mattresses for sale. These mattresses are produced by a third-party manufacturer and sold at our Thrift Store.